Always be open to interns

Invest your time, be open minded, search for, and nurse interns. Interns can bring you high quality work, can be free, might be your next full timer, and can offer a breath of fresh air, inspiration and creativity.

Open minded is a key word - maybe you didn't think you needed a business development intern, or a graphic designer. If they are willing to work and they are sharp, bring them in. Invest some time talking at schools, hosting events, and posting internship opportunities.

Interns benefit from this arrangement too. They build their resume, gain real experience (probably diverse and meaningful experience), and position themselves for a job with you!

Warning: Be sure they get something from the experience - ask them if they are (or what would make them) having a good experience. More importantly, make sure you don't spend too much time telling them what to do. Time sucking interns are like the plague! Pick a few isolated projects you can let them run with. Give them free reign and have regular check-in and feedback sessions. If they bring more trouble than value cut them loose.
Posted by Matt Cholerton No comments:

Picture three bricklayers building a church. Each picks up a brick, spreads mortar on it, and sets in place.

A little boy sees them working and ask each bricklayer what they are doing.

The first bricklayer replies, "I'm putting one brick on top of another. Isn't it obvious?"

The second says "I'm building a wall for the west side of the church."

The third bricklayer says "I'm creating a cathedral. It will stand for centuries and inspire people to do great deeds."

Which of the bricklayers is looking at his watch waiting for quitting time? Which one knows only about her task? Which one is truly engaged, focused on the outcome - motivated to make the church as good as it can be?

It's a simple story. But one that shows how powerful true engagement can be. It demonstrates why it's worthwhile for you to care about engaging employees, and why you should be investing time in employees - and helping them see and be part of the end goal. Unfortunately, I did not make this analogy up myself. I've borrowed it from the Art of Engagement by Jim Haudan. I've just started reading but I'm excited to dig in more. Stay tuned.

Which bricklayer would you want on your team? What do you do now to get the right type of bricklayer?
Posted by Matt Cholerton No comments:

To Review or not to Review 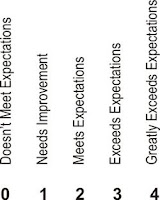 I love hearing opinions about performance reviews. It's usually complaints that the review process is not meaningful, it doesn't reflect performance, and is even damaging. Start-ups often decide to dismiss annual reviews altogether. 'Performance reviews are old school and lame, instead we just give regular feedback,' I can hear them say.

This New York Times interview with Yahoo's chief executive Carol Bartz, titled 'Imagining a World of No Annual Reviews" enforces this mindset - and reminded me that I love listening to this debate.

When the puppy pees on the carpet, you say something right then because you don’t say six months later, “Remember that day, January 12th, when you peed on the carpet? If I had my way I wouldn’t do annual reviews, if I felt that everybody would be more honest about positive and negative feedback along the way. I think the annual review process is so antiquated.

Wait a minute Carol - you are the chief executive, why don't you have your way? The main

reason you don't is that managers do not give regular feedback. They probably give more feedback to their dog than to their staff. They do not have meaningful conversations with employees to learn work challenges, areas they are interested, frustration points, nor to discuss good and bad performance areas. Now I know there are some superb managers, but generally the feedback just doesn't happen, managers aren't trained well, or they don't care. Actually, its these same things (magnified) as to why they hate annual reviews. Managers don't want to give real thought to giving constructive feedback or deal with what they perceive as an awkward interaction.

You know... if meaningful feedback actually did happen regularly, an 'official review' wouldn't bother anyone, would it? It would be a normal meeting for them. It wouldn't be awkward, there would be no surprises. It wouldn't be a big deal.

Don't get me wrong. I fundamentally agree with Carol. But since we don't give regular feedback and employees want it, we need to do something else. What? You want me to repeat that? Yes, employees actually want feedback, and even ask for it. People want to think they spend all their time doing something valuable - they actually do want legitimate praise and to hear/discuss real ways to improve.

So here's what I believe: If you are a start-up with a strong review system, stay with it. If you do nothing, then you need to start with at least one 'formal' review (at the end of the year) and preferably another one mid-year. This review doesn't have to have 1-5 scales, objectives set at beginning of the year, or any other traditional or formal elements. It should just be a time that forces everyone to get some feedback, to collect employee's wants and issues, to discuss position or department or company performance and goals, and maybe to discuss pay increases? I like starting with requesting employees to write up their accomplishments, challenges, what they want to work on short/long term, and what they have/have not enjoyed about their position or project. Employees give their one-page write up to their lead, who reflects, adds real stuff to it, and sits down to discuss. It's a start. Maybe an annual process that is used, and thoughtfully considered, will help create a real regular feedback environment?

What do you do? Does it work? Do you hate reviews? Do you get helpful feedback throughout the year?