The Wall Street Journal just posted a piece about how Performance Reviews suck.

This corporate sham is one of the most insidious, most damaging, and yet most ubiquitous of corporate activities.... Pretentious, bogus practice that produces absolutely nothing...

Ouch ... now that is some nasty name calling. But, we already know everyone hates HR, and especially performance reviews. This article just feels like 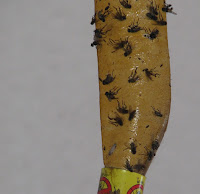 a strip of flypaper - attracting those that share a displeasure in their under-performing managers and antiquated, broken systems. It's not too hard to do.

The author, Samuel A. Culbert, claims there is a

better way - simply 'asking and listening'. He throws in some belittling to boot, "Imagine that. It's called a conversation, and it's a rarity in workplaces today." Well, well, well ... Good Day Sir!

Really, all of this is NOT about the performance review, it's about bad performance reviews. It's about poor managers and management. I agree a bad review (i.e. rigid, irrelevant paperwork) and bad management is harmful to the company, to relationships, and productivity. But I can't help think Culbert's gratuitous and cavalier flogging of the process solves nothing. Except, perhaps, it perpetuates the dogma that the review is the problem.

Culbert's suggestion of 'asking and listening' (or ideas of 'straight talk' and 'previews' he has previously suggested) can go just as wrong as a review! It can be ignored, it can be inconsistent, and it can subjective. It can be Don't be such a hater.
Posted by Matt Cholerton